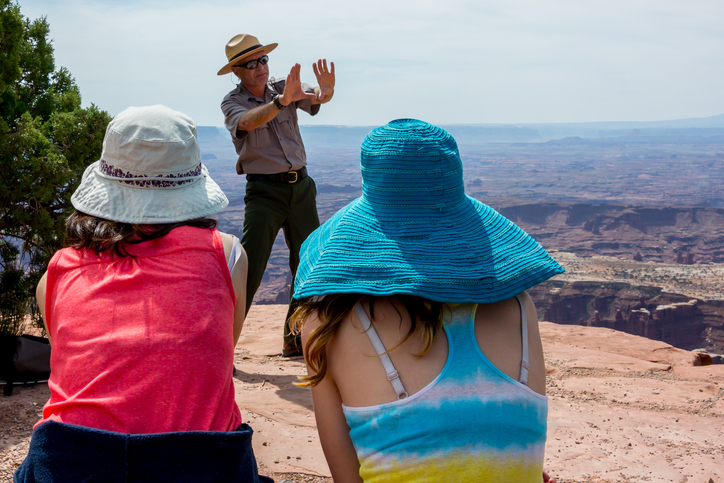 University of West Alabama
Featured Program: Deepen your understanding of biodiversity, natural ecosystems and our impact on the planet with the online M.S. in Conservation Biology.
Request Info

NPS was developed to preserve and protect historical and ecological places and oversee the public’s ability to visit these sites. Millions of tourists visit these national treasures each and every year and during the course of the last century the ever-increasing crowds have challenged the NPS’s ability to safeguard these sites… and the tourists that visit them

The next one hundred years will bring about major hurdles for the NPS as it tries to maintain the integrity of national landmarks and ensure the safety of those who visit them.

The biggest challenge currently facing the agency is the sheer overcrowding that many of these sites are facing. In 2015 alone, the national park system received more than 3.5 million visitors, a massive wave of humanity that concentrates in the summer months, bringing traffic and a variety of problems that threaten the very things they are coming to admire.

The most popular sites like Yosemite, the Grand Canyon and Yellowstone are particularly vulnerable to the effects of overcrowding.

With millions of people flowing through these sites each year, loose trash continues to ugly-up wilderness areas while introducing inorganic material that is harmful to wildlife.

The massive amount of trash that’s being collected is now creating budgetary concerns as the cost to manage the waste continues to mount. In 2015 alone, 100 million tons of garbage had to be disposed of, costing the NPS millions of dollars and taxing an already underfunded budget.

The environmental concerns that come with producing an excessive amount of trash – even when properly disposed of – are well-known and well-documented, with landfill waste now responsible for 20% of the methane gas polluting the earth.

Some of the larger park systems like Grand Teton and Yosemite are trying to reduce or the amount of trash going into landfills by expanding composting and recycling efforts.

Despite these efforts, the NPS cannot fix the extensive trash issues on their own. The agency has begun to call on the public to help by bringing in reusable water bottles when visiting, and implementing pack-in, pack-out policies that ask visitors to take their own garbage with them when they leave.

Obeying The Rules Saves Lives … Both Wildlife and Tourists

The overcrowding of the national park system will also continue to test park ranger’s ability to protect the public and the wildlife. As visitor numbers continue to increase there will be those who venture outside of the public areas to remote wilderness sites, an issue that inevitably leads to encounters with dangerous wildlife.

Bison in Yellowstone gored five people in 2015 alone, two of those attacks came when the visitors were trying to take a selfie. Bison have the ability to run up to 30MPH, giving a human very little time to escape its path. “I can’t tell you how many times I have to talk to people and say ‘Step back. There’s a dangerous animal,’ and they look at me like I have three heads,” said Yellowstone Superintendent Dan Wenk.

One of the most publicized incidents involving tourists and wildlife occurred in May 2016 when a father and son visiting Yellowstone thought they were rescuing a baby bison. The pair came across the baby and didn’t see a mother so they decided to put it in the back of their truck, thinking they were rescuing it from the cold. Instead, the baby bison had to be euthanized by the park service because according to the park service, it was rejected by its mother due to “interference by people.”

Incidents like these continue to increase along with the number of visitors. Park rangers are unable to watch and control the activities of every tourist that comes into the parks. Unfortunately, they are called in after a problem has already presented itself. The NPS continues to try to educate the public about the dangers of wildlife encounters, however; it has to be able to depend on visitors to follow the rules as well.

In November 2016 a young man was seen walking off a boardwalk in the Norris Geyser Basin into a hot spring. According to officials, the man essentially dissolved in the acidic spring. Apparently he was reaching down to test the temperature of the spring when he accidentally fell into it.

Visitors who stray from public areas also increase the workload of park rangers with search and rescue missions. In February 2017 a New York man became disoriented while hiking in Colorado’s Great Sand Dunes National Park and Preserve, spending five days alone in the wilderness. A search and rescue team was successful in locating the man, but, of course, these efforts are very costly to the park system.

There are countless cases of tourists engaged in such criminal and negligent behavior. In 2016, law enforcement rangers of the national park system handled more than 11,000 incidents during the month of July alone, and as July 2017 fast approaches there is no reason to believe things will be any better this year.

The park maintenance backlog is estimated to be at close to $12 billion currently. Harsh weather conditions in some regions have caused some landmarks to simply disappear. Others, like the glaciers of Glacier National Park in Montana, are in danger of disappearing as temperature and precipitation changes cause excessive melting. And an excessive amount of tourists have also caused the trampling down of some protected wilderness areas.

A shrinking budget for the National Park System during a time when increased crowds are causing an even greater need for these funds is another major concern. Will we continue to allocate the resources necessary to protect these national landmarks and natural wonders?

Buildings, roads and sewers in need of repair within park grounds continue to deteriorate while awaiting much needed funding. Campgrounds across the park system continue to close and operating hours in the parks have been reduced causing additional crowds during operational hours.

Even those charged with protecting these resources are facing seasonal layoffs in an effort to reduce costs. “We’ve crested: We can no longer offer the quality of experience we once did,” says Yellowstone’s resource chief, John Varley. “I see us as barely treading water,” added Superintendent Michael Finley.

The NPS, while charged with the preservation and protection of our national landmarks, cannot do it alone. Education and advocacy groups are needed to spread the word of the peril our national parks are facing. And tourists need to remember it is a privilege to visit these sites. This privilege comes with only one obligation: to follow the rules and guidelines to keep these sites for generations to come, and to ensure their own safety while visiting.